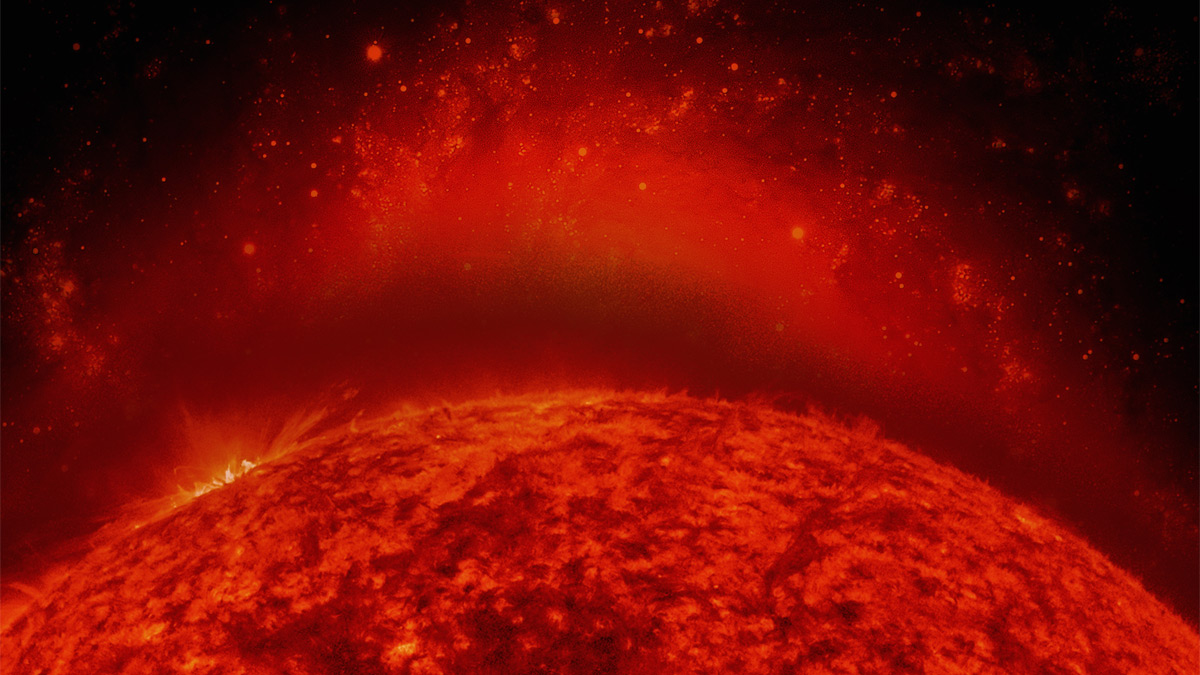 Despite its relative youth as an area of scientific research, the study of space weather is critically important. Events such as geomagnetic storms, radiation storms and solar flares are listed in the UK Government's National Risk Register of Civil Emergencies due to the adverse effect they can have on our planet and the space environment surrounding it.

Professor Mathew Owens, Professor of Space Physics in the Department of Meteorology, studies the Sun – specifically the effect it has on humans and technology such as power grids, aircraft and satellites.

"Space weather is a big threat to our national infrastructure, because it has the potential to knock out our power grid. It only has to burn one transformer in the network for it to be a problem; once one transformer is down, it puts extra load on the rest. These transformers are time consuming and expensive to manufacture, meaning it can take a long time to get the grid back up."

We have only been making detailed measurements of the Sun for the past 50 to 60 years. The Sun's cycle lasts approximately 11 years, meaning that during this time we've witnessed only four or five of the Sun's seasons.

The Met Office Space Weather Operations Centre (MOSWOC) currently forecasts space weather in a similar way to how it approaches terrestrial weather: it makes observations and puts them into a computer simulation, which then forecasts forward a few days. However, it's limited by the relatively small number of observations and our physical understanding of the Sun.

Mathew led a project to produce statistical techniques influenced by the terrestrial weather forecasting method known as "persistence forecasting". This approach essentially assumes that tomorrow's weather will be the same as today's weather.

"Weather forecasting began about 150 years ago and has been improving ever since, but it took a long time to routinely surpass simple persistence in terms of forecast accuracy. Space weather is a similar scenario: the persistence tool is very useful here, but instead of saying 'the weather today is what it will be tomorrow', you say 'the weather tomorrow will be what it was 27 days ago, due to the Sun completing its rotation every 27 days."

MOSWOC has since adopted these tools in addition to their cutting-edge simulation-based forecasts. This statistical approach is especially robust because it doesn't rely on satellites and other technology, meaning there is no risk of space weather disrupting the observations.

The European Space Agency (ESA) is currently preparing a mission to send an unmanned probe to get closer to the Sun than any previous spacecraft. Mathew is involved, working on Solar Orbiter's instrument that measures magnetic fields. His research feeds into many of the other scientific goals of the mission.

"There is material that is constantly blowing off the Sun – solar wind – and in order for this material to escape the Sun's gravity, it has to be moving at an incredibly fast speed. It is currently not clear how this material has enough energy to allow it to escape, and so one of the big overarching goals of Solar Orbiter is to determine that."

Getting students involved in research

Mathew has led many of these projects in the past. One of the most successful projects involved MSc Meteorology alumna Rosemary Challen, who worked with Mathew on developing the 27-day persistence model of near-Earth solar wind conditions. The project went on to become a paper in the academic journal Space Weather, and the model is now used by the Met Office in its own forecasting activities.

"These projects are a great way to learn what research is about. You develop the core skills needed to be a PhD student, and it's really different to what and how you learn in your lectures."

Learn more about research in the Department of Meteorology

Take the next step